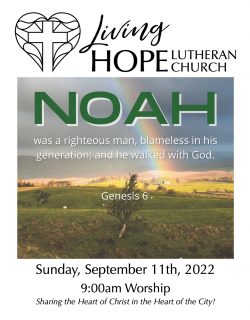 5The LORD saw that the wickedness of humankind was great in the earth, and that every inclination of the thoughts of their hearts was only evil continually. 6And the LORD was sorry that he had made humankind on the earth, and it grieved him to his heart. 7So the LORD said, “I will blot out from the earth the human beings I have created — people together with animals and creeping things and birds of the air, for I am sorry that I have made them.” 8But Noah found favor in the sight of the LORD.

9These are the descendants of Noah. Noah was a righteous man, blameless in his generation; Noah walked with God. 10And Noah had three sons, Shem, Ham, and Japheth.

11Now the earth was corrupt in God’s sight, and the earth was filled with violence. 12And God saw that the earth was corrupt; for all flesh had corrupted its ways upon the earth. 13And God said to Noah, “I have determined to make an end of all flesh, for the earth is filled with violence because of them; now I am going to destroy them along with the earth. 14Make yourself an ark of cypress wood; make rooms in the ark, and cover it inside and out with pitch. 15This is how you are to make it: the length of the ark three hundred cubits, its width fifty cubits, and its height thirty cubits. 16Make a roof for the ark, and finish it to a cubit above; and put the door of the ark in its side; make it with lower, second, and third decks. 17For my part, I am going to bring a flood of waters on the earth, to destroy from under heaven all flesh in which is the breath of life; everything that is on the earth shall die. 18But I will establish my covenant with you; and you shall come into the ark, you, your sons, your wife, and your sons’ wives with you. 19And of every living thing, of all flesh, you shall bring two of every kind into the ark, to keep them alive with you; they shall be male and female. 20Of the birds according to their kinds, and of the animals according to their kinds, of every creeping thing of the ground according to its kind, two of every kind shall come in to you, to keep them alive. 21Also take with you every kind of food that is eaten, and store it up; and it shall serve as food for you and for them.” 22Noah did this; he did all that God commanded him.

6At the end of forty days Noah opened the window of the ark that he had made 7and sent out the raven; and it went to and fro until the waters were dried up from the earth. 8Then he sent out the dove from him, to see if the waters had subsided from the face of the ground; 9but the dove found no place to set its foot, and it returned to him to the ark, for the waters were still on the face of the whole earth. So he put out his hand and took it and brought it into the ark with him. 10He waited another seven days, and again he sent out the dove from the ark; 11and the dove came back to him in the evening, and there in its beak was a freshly plucked olive leaf; so Noah knew that the waters had subsided from the earth. 12Then he waited another seven days, and sent out the dove; and it did not return to him any more.

24A windstorm arose on the sea, so great that the boat was being swamped by the waves; but he was asleep. 25And they went and woke him up, saying, “Lord, save us! We are perishing!” 26And he said to them, “Why are you afraid, you of little faith?” Then he got up and rebuked the winds and the sea; and there was a dead calm. 27They were amazed, saying, “What sort of man is this, that even the winds and the sea obey him?”