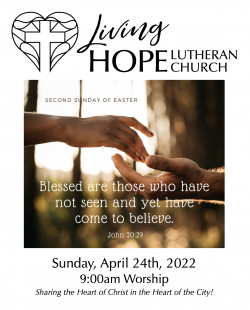 13Your kingdom is an everlasting kingdom,

and your dominion endures throughout all generations.

The LORD is faithful in all his words,

and gracious in all his deeds.

14The LORD upholds all who are falling,

and raises up all who are bowed down.

15The eyes of all look to you,

and you give them their food in due season.

16You open your hand,

satisfying the desire of every living thing.

17The LORD is just in all his ways,

and kind in all his doings.

18The LORD is near to all who call on him,

to all who call on him in truth.

19He fulfills the desire of all who fear him;

he also hears their cry, and saves them.

20The LORD watches over all who love him,

but all the wicked he will destroy.

21My mouth will speak the praise of the LORD,

and all flesh will bless his holy name forever and ever.

19When it was evening on that day, the first day of the week, and the doors of the house where the disciples had met were locked for fear of the Jews, Jesus came and stood among them and said, “Peace be with you.” 20After he said this, he showed them his hands and his side. Then the disciples rejoiced when they saw the Lord. 21Jesus said to them again, “Peace be with you. As the Father has sent me, so I send you.” 22When he had said this, he breathed on them and said to them, “Receive the Holy Spirit. 23If you forgive the sins of any, they are forgiven them; if you retain the sins of any, they are retained.”

24But Thomas (who was called the Twin), one of the twelve, was not with them when Jesus came. 25So the other disciples told him, “We have seen the Lord.” But he said to them, “Unless I see the mark of the nails in his hands, and put my finger in the mark of the nails and my hand in his side, I will not believe.”

26A week later his disciples were again in the house, and Thomas was with them. Although the doors were shut, Jesus came and stood among them and said, “Peace be with you.” 27Then he said to Thomas, “Put your finger here and see my hands. Reach out your hand and put it in my side. Do not doubt but believe.” 28Thomas answered him, “My Lord and my God!” 29Jesus said to him, “Have you believed because you have seen me? Blessed are those who have not seen and yet have come to believe.”