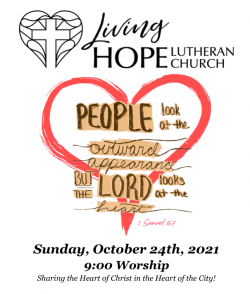 1The LORD said to Samuel, “How long will you grieve over Saul? I have rejected him from being king over Israel. Fill your horn with oil and set out; I will send you to Jesse the Bethlehemite, for I have provided for myself a king among his sons.” 2Samuel said, “How can I go? If Saul hears of it, he will kill me.” And the LORD said, “Take a heifer with you, and say, ‘I have come to sacrifice to the LORD.’ 3Invite Jesse to the sacrifice, and I will show you what you shall do; and you shall anoint for me the one whom I name to you.” 4Samuel did what the LORD commanded, and came to Bethlehem. The elders of the city came to meet him trembling, and said, “Do you come peaceably?” 5He said, “Peaceably; I have come to sacrifice to the LORD; sanctify yourselves and come with me to the sacrifice.” And he sanctified Jesse and his sons and invited them to the sacrifice.

6When they came, he looked on Eliab and thought, “Surely the LORD’s anointed is now before the LORD.” 7But the LORD said to Samuel, “Do not look on his appearance or on the height of his stature, because I have rejected him; for the LORD does not see as mortals see; they look on the outward appearance, but the LORD looks on the heart.” 8Then Jesse called Abinadab, and made him pass before Samuel. He said, “Neither has the LORD chosen this one.” 9Then Jesse made Shammah pass by. And he said, “Neither has the LORD chosen this one.” 10Jesse made seven of his sons pass before Samuel, and Samuel said to Jesse, “The LORD has not chosen any of these.” 11Samuel said to Jesse, “Are all your sons here?” And he said, “There remains yet the youngest, but he is keeping the sheep.” And Samuel said to Jesse, “Send and bring him; for we will not sit down until he comes here.” 12He sent and brought him in. Now he was ruddy, and had beautiful eyes, and was handsome. The LORD said, “Rise and anoint him; for this is the one.” 13Then Samuel took the horn of oil, and anointed him in the presence of his brothers; and the spirit of the LORD came mightily upon David from that day forward. Samuel then set out and went to Ramah.

19Now Saul, and they, and all the men of Israel, were in the valley of Elah, fighting with the Philistines. 20David rose early in the morning, left the sheep with a keeper, took the provisions, and went as Jesse had commanded him. He came to the encampment as the army was going forth to the battle line, shouting the war cry. 21Israel and the Philistines drew up for battle, army against army. 22David left the things in charge of the keeper of the baggage, ran to the ranks, and went and greeted his brothers. 23As he talked with them, the champion, the Philistine of Gath, Goliath by name, came up out of the ranks of the Philistines, and spoke the same words as before. And David heard him.

31When the words that David spoke were heard, they repeated them before Saul; and he sent for him. 32David said to Saul, “Let no one’s heart fail because of him; your servant will go and fight with this Philistine.” 33Saul said to David, “You are not able to go against this Philistine to fight with him; for you are just a boy, and he has been a warrior from his youth.” 34But David said to Saul, “Your servant used to keep sheep for his father; and whenever a lion or a bear came, and took a lamb from the flock, 35I went after it and struck it down, rescuing the lamb from its mouth; and if it turned against me, I would catch it by the jaw, strike it down, and kill it. 36Your servant has killed both lions and bears; and this uncircumcised Philistine shall be like one of them, since he has defied the armies of the living God.” 37David said, “The LORD, who saved me from the paw of the lion and from the paw of the bear, will save me from the hand of this Philistine.” So Saul said to David, “Go, and may the LORD be with you!”

[Jesus said to the Jewish leaders] 19Did not Moses give you the law? Yet none of you keeps the law. Why are you looking for an opportunity to kill me? 20The crowd answered, “You have a demon! Who is trying to kill you?” 21Jesus answered them, “I performed one work, and all of you are astonished. 22Moses gave you circumcision (it is, of course, not from Moses, but from the patriarchs), and you circumcise a man on the sabbath.

23If a man receives circumcision on the sabbath in order that the law of Moses may not be broken, are you angry with me because I healed a man’s whole body on the sabbath? 24Do not judge by appearances, but judge with right judgment.”