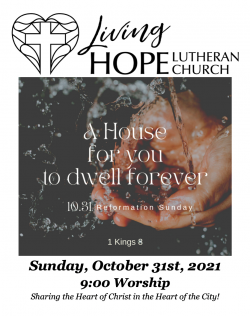 1 Now King Hiram of Tyre sent his servants to Solomon, when he heard that they had anointed him king in place of his father; for Hiram had always been a friend to David. 2Solomon sent word to Hiram, saying, 3You know that my father David could not build a house for the name of the LORD his God because of the warfare with which his enemies surrounded him, until the LORD put them under the soles of his feet. 4But now the LORD my God has given me rest on every side; there is neither adversary nor misfortune. 5So I intend to build a house for the name of the LORD my God, as the LORD said to my father David, ‘Your son, whom I will set on your throne in your place, shall build the house for my name.’

1Then Solomon assembled the elders of Israel and all the heads of the tribes, the leaders of the ancestral houses of the Israelites, before King Solomon in Jerusalem, to bring up the ark of the covenant of the LORD out of the city of David, which is Zion. 2All the people of Israel assembled to King Solomon at the festival in the month Ethanim, which is the seventh month. 3And all the elders of Israel came, and the priests carried the ark. 4So they brought up the ark of the LORD, the tent of meeting, and all the holy vessels that were in the tent; the priests and the Levites brought them up. 5King Solomon and all the congregation of Israel, who had assembled before him, were with him before the ark, sacrificing so many sheep and oxen that they could not be counted or numbered. 6Then the priests brought the ark of the covenant of the LORD to its place, in the inner sanctuary of the house, in the most holy place, underneath the wings of the cherubim. 7For the cherubim spread out their wings over the place of the ark, so that the cherubim made a covering above the ark and its poles. 8The poles were so long that the ends of the poles were seen from the holy place in front of the inner sanctuary; but they could not be seen from outside; they are there to this day. 9There was nothing in the ark except the two tablets of stone that Moses had placed there at Horeb, where the LORD made a covenant with the Israelites, when they came out of the land of Egypt. 10And when the priests came out of the holy place, a cloud filled the house of the LORD, 11so that the priests could not stand to minister because of the cloud; for the glory of the LORD filled the house of the LORD.

“The LORD has said that he would dwell in thick darkness.

13I have built you an exalted house,

a place for you to dwell in forever.”

19Jesus answered them, “Destroy this temple, and in three days I will raise it up.” 20The Jews then said, “This temple has been under construction for forty-six years, and will you raise it up in three days?” 21But he was speaking of the temple of his body.