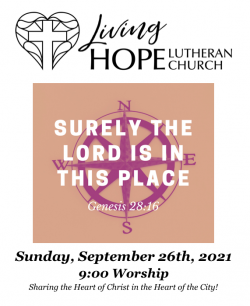 1When Isaac was old and his eyes were dim so that he could not see, he called his elder son Esau and said to him, “My son”; and he answered, “Here I am.” 2He said, “See, I am old; I do not know the day of my death. 3Now then, take your weapons, your quiver and your bow, and go out to the field, and hunt game for me. 4Then prepare for me savory food, such as I like, and bring it to me to eat, so that I may bless you before I die.”

15Then Rebekah took the best garments of her elder son Esau, which were with her in the house, and put them on her younger son Jacob; 16and she put the skins of the kids on his hands and on the smooth part of his neck. 17Then she handed the savory food, and the bread that she had prepared, to her son Jacob.

18So he went in to his father, and said, “My father”; and he said, “Here I am; who are you, my son?” 19Jacob said to his father, “I am Esau your firstborn. I have done as you told me; now sit up and eat of my game, so that you may bless me.” 20But Isaac said to his son, “How is it that you have found it so quickly, my son?” He answered, “Because the LORD your God granted me success.” 21Then Isaac said to Jacob, “Come near, that I may feel you, my son, to know whether you are really my son Esau or not.” 22So Jacob went up to his father Isaac, who felt him and said, “The voice is Jacob’s voice, but the hands are the hands of Esau.” 23He did not recognize him, because his hands were hairy like his brother Esau’s hands; so he blessed him.

10Jacob left Beer-sheba and went toward Haran. 11He came to a certain place and stayed there for the night, because the sun had set. Taking one of the stones of the place, he put it under his head and lay down in that place. 12And he dreamed that there was a ladder set up on the earth, the top of it reaching to heaven; and the angels of God were ascending and descending on it. 13And the LORD stood beside him and said, “I am the LORD, the God of Abraham your father and the God of Isaac; the land on which you lie I will give to you and to your offspring; 14and your offspring shall be like the dust of the earth, and you shall spread abroad to the west and to the east and to the north and to the south; and all the families of the earth shall be blessed in you and in your offspring. 15Know that I am with you and will keep you wherever you go, and will bring you back to this land; for I will not leave you until I have done what I have promised you.” 16Then Jacob woke from his sleep and said, “Surely the LORD is in this place — and I did not know it!” 17And he was afraid, and said, “How awesome is this place! This is none other than the house of God, and this is the gate of heaven.”